Feeling safe and secure in our homes and in the wider community can positively influence how we live our lives. Each month this section of the Bulletin will offer simple and practical tips to improve personal and household safety. This month we are talking about calling 000.

Although we all hope we never have to use the emergency phone number 000 to call the Ambulance, Police or Fire Brigade, this is what will happen as soon as your call is connected.

On Thursday, 8 April 21 it was my pleasure to attend the meeting of the Hadspen Neighbourhood Watch (NHW) and recognise the outstanding service of their Coordinator, Gerry Bartley, who had announced her retirement from the role after 30 years of membership.

Hadspen NHW started in 1991 and Gerry was an enthusiastic and active member of the inaugural committee. They door knocked for donations and provided resources in return, such as letterbox signs and property identification stickers. As publicity officer, Gerry typed up the hand-written police reports and would then spend a full day printing the newsletter off!

By 1997 Gerry was in a community committee role to plan, design, raise funds and coordinate the Hadspen Recreation Park and Memorial Centre. Since then, Gerry took on the NHW Coordinator’s role and has contributed to a multitude of projects which include (but are not limited to):

The State Board considered that Gerry epitomised outstanding community service and they were unanimous in endorsing her for the award of Honorary Life Membership. Gerry will be formally presented with her Award Certificate at our AGM on 20 November 2021 in Launceston.

The work of Neighbourhood Watch in Tasmania is done by volunteers. Although they don’t do it for personal gain it is important that we all make the effort to recognise the exceptional contributions that have been made by many of our members. An interim policy is available that sets out our hierarchy of Honours and Awards and how you can nominate people for recognition. Feedback on the policy is welcome.

In brief, there are three Neighbourhood Watch Awards:

Importantly, the policy asks for nominations to be received by 30 June each year so that recipients can be advised by 30 September and the Awards bestowed at the Annual General Meeting each November. There is no set format for nominations to be made and ideally the information should be sent in an email to admin@nhwtas.org.au.

How to organise a Cuppa with a Cop

We believe Coffee with a Cop started in the USA when members of the Hawthorne Police Department were looking for ways to interact more successfully with their citizens. Such was the success of this venture that the program has expanded worldwide into Canada, Europe, Africa and is in most states of Australia. NHWT seized this initiative and rebranded it as Cuppa with a Cop (CWAC) to enhance police and community relations one cup at a time. It recognises that most people only engage with police officers in formal settings and so it provides a social occasion for personal interaction and to thank the police for the service they provide.

Here are the recommended steps you should take to make a CWAC happen.

Cuppa with a Cop at Oakdowns

On Wednesday, 28 April 21 a very successful Cuppa with a Cop (CWAC) was hosted by the Oakdowns Neighbourhood Watch at the Grace Centre in Clarence Plains. The weather was fantastic, the Moto Vecchia coffee van poured first class coffees for an hour and the event was well attended by members of Tasmania Police and members of the Clarence Plains community. Special thanks go to Inspector Brett Berry, the Officer in Charge of the Clarence Division and the Clarence Council for funding the event through a Community Recovery Grant.

More photos from the event can be seen on our Facebook Page. 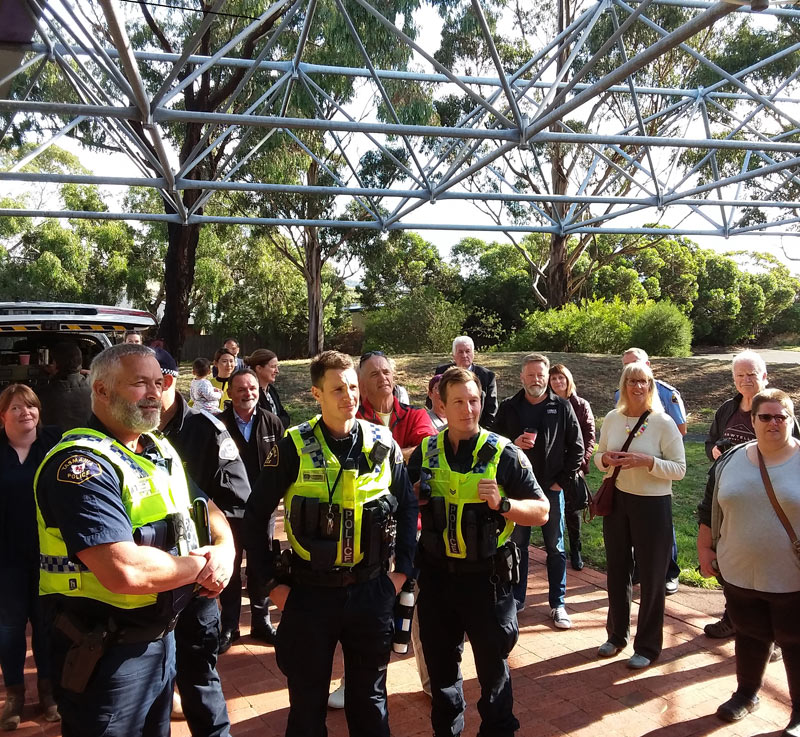 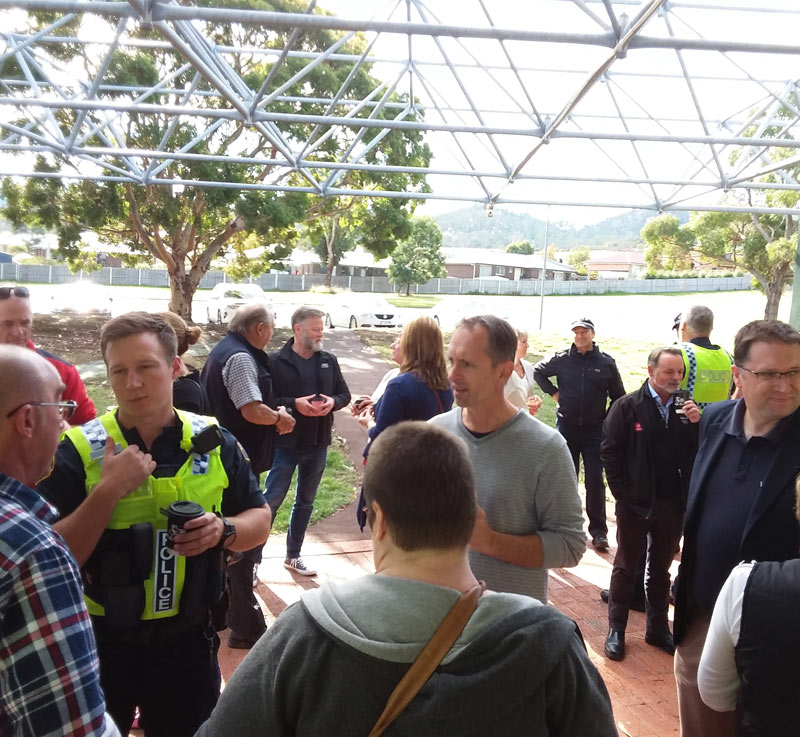 The Neighbourhood Watch Tasmania website is fortunate to have the services of Andrew Lockman who helps design and manage our online presence. Recently Andrew has helped us create a blog where you can find all previous issues of our Monthly Bulletin, starting from January 2021. You can find them under Media and News.

The dates for this conference, 21 & 22 May 21 are looming large. Special discount deals are still available up until 7 May 21 and members can still apply to NHWT for a $500 grant to attend. So, if you really want some Neighbourhood Watch inspiration on the Gold Coast click on this link to find out more https://nhw2021.com.au/

Scamwatch is run by the Australian Government and reports on Scams to prevent people becoming a victim. A recent scam relates to buying second-hand vehicles. Scammers post fake online listings to sell in-demand cars at well below market value to lure potential buyers. Their scheme is to have the victim pay over the money to a third party who will ‘hold’ the money until the vehicle is received. Or to make the payment through ebay, direct bank transfer or international money transfer.

Vehicle scams are commonly hosted on sites such as Facebook Marketplace, Autotrader, Car Sales, Cars Guide and Gumtree. A new technique is for the scammer to claim to be in the military (navy, army or air force) and they need to sell their car quickly before deployment. This story creates a sense of urgency with buyers and explains why the price is so low – and why the vehicle cannot be inspected prior to payment!

If the price is too good to be true; if you can’t inspect the vehicle prior to delivery; if the seller requests an unusual method for payment – you need to be highly suspicious. Take our advice – Don’t go there!!

Tasmania Police reported this incident which occurred on the Poatina Road, about 3pm on Friday, 2 April 21. Several pieces of cut firewood came from the tray of a ute. The wood has struck the windshield of a vehicle travelling in the opposite direction. Needless to say, the results could have been fatal.

The attached photo tells the story. The importance of drivers taking the time and effort to secure their load cannot be overstated.

If you transport your own firewood, cart material in your ute or trailer, the responsibility rests with you. Yes, heavy fines apply – but the risks are much higher – and preventable! 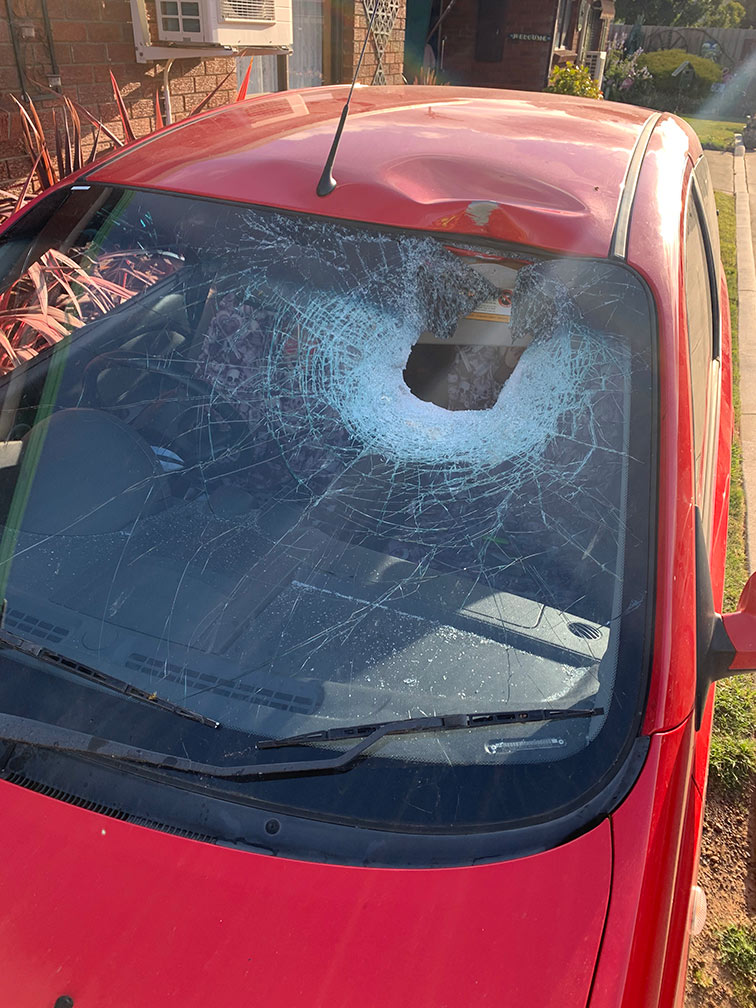 Each month we have added to this list and then taken one initiative and provided more information on how to go about doing it. This month we talked about running a Cuppa with a Cop.

Don’t forget to download your Check In TAS app which is now mandatory when visiting any facility in Tasmania. It is easy to download and easy to use. https://coronavirus.tas.gov.au/check-in-tas.