Neighbourhood Watch (NHW) have done it again with another Order of Australia Medal awarded on Australia Day Honours List for 2022. Congratulations to Malcolm Cash OAM NHW Newnham Secretary and NHWT Life Member. We take great pride in celebrating this wonderful achievement for one of our long-standing and committed members.

Malcolm has been an active member of the Newnham Neighbourhood Watch Group since it started 30 years ago. In 2019 he was the Tasmanian nominee for the Neighbourhood Watch Australasia Volunteer of the Year Award. Malcolm is known to have led a life of volunteering and is often the first one to put up his hand to take on tasks for the groups he has been involved in over many years.

Malcolm has served as the State Secretary of the Vietnam Veterans Association of Australia and also as Treasurer of its Launceston Sub-Branch. He has previously served on the Board of the Launceston RSL and still assists with Legacy collections. Malcolm has previously been a Board member and volunteer to support the North Launceston Football Club and as the General Secretary of the Railway Institute in Tasmania. And this is not a comprehensive list of Malcolm’s service to the community.

Debbie Williams joined Tasmania Police in 1990 and was promoted to be the Commander of Western District in 2018. As the Regional Emergency Management Controller in 2020, Commander Williams activated the Northwest Regional Coordination Centre following the COVID-19 outbreak at the North West Regional Hospital to manage the unprecedented and complex emergency management situation.

Shane Sinnitt joined Tasmania Police in 1995 and has established himself as a highly skilled detective, predominately in southern Tasmania. Detective Sergeant Sinnitt played a key role investigating the murder of Bob Chappell, which led to a murder conviction for that crime.

Congratulations to both officers.

And if that wasn’t enough…
You would recall that Roxley Snare OAM from Central Wynyard NHW was awarded his Order of Australia Medal in the 2021 Queens Birthday Honours List. A highlight of being a recipient of these awards is to have them bestowed by the Governor at Government House in Hobart. Unfortunately, Roxley couldn’t get to Government House on the day, so the Governor went to Wynyard to personally present the medal! Such is the pull of Neighbourhood Watch Tasmania and Roxley Snare OAM!

Because some people find it difficult to build relationships, with thanks to Relationships Australia, here are five simple tips anyone can feel comfortable to use to connect with others.

It is with regret that our State Board has received the resignation of Frank Pearce because on the 14th of February 22 Frank and his wife Linda will move to Victoria. Frank has been our Vice President and Public Officer and the Board members have benefitted greatly from his knowledge and wise counsel during his tenure. Frank was instrumental in re-writing our constitution, developing planning and policy documents and contributing to a revised version of our Governance Policy and Procedures Manual. These documents are important to guide Board decision making so that it meets community and government standards.

We sincerely thank Frank for his contribution to the leadership of Neighbourhood Watch Tasmania during the difficult COVID-19 years and we wish him all the best for his future on the big island. 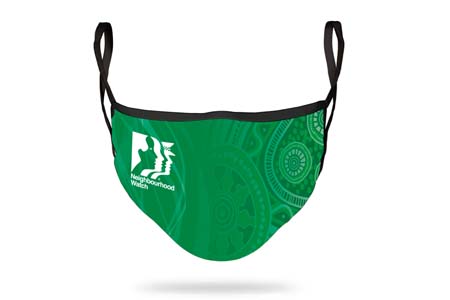 This price is considerably cheaper than many other custom-made masks and every purchase is for the benefit of the Neighbourhood Watch cause.

Montrose and Rosetta are one of our newest NHW groups and their Coordinators, Dawn Hendrick and Peter Vogelsanger are actively promoting the NHW brand and driving to increase their membership. By running a raffle during Neighbourhood Watch Week at Bunnings Glenorchy they were able to raise funds which help them be more engaging and proactive in their community.

As part of their membership drive, they have established a local NHW Facebook page on which they post and share relevant community, police, and safety information. Seizing the availability of NHW masks they applied for a grant from NHWT to go halves in the purchase of 50 masks. Their order was received two days later, and they have already started distributing the masks to new members.

A NHW group purchasing some masks is a simple initiative to grow your engagement with your community and promote our brand. The State Board is always keen to support grant applications on a co-contribution basis. Food for thought to start 2022 as our year for at least do something!

On the opposite side of the Derwent River to Montrose and Rosetta is the picturesque suburb of Old Beach in the Brighton Municipality. Our Old Beach NHW group was established late in 2021 and to their credit they took the mantra of do something to heart and ran a Bunnings barbecue with their local volunteer fire brigade during Neighbourhood Watch Week in November 2021.

Doing something can be infectious because in December 21 the group had a working bee to clean up their foreshore. Some of the comments from participants were: “It’s a great way to get to know others in our community” and “I feel really good doing something like this.”

Well done to the Old Beach team. Keep up the good work – your community is the beneficiary. 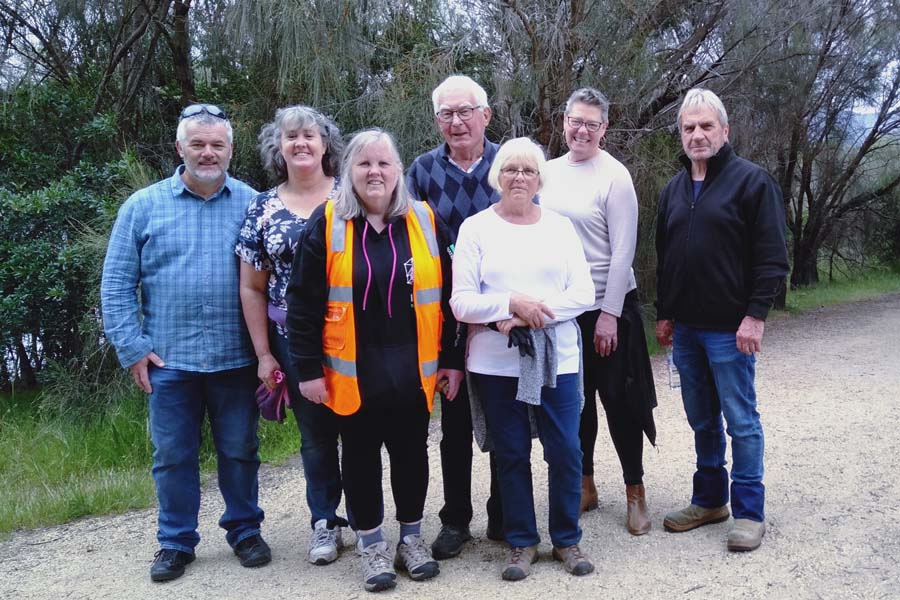 Every month Neighbourhood Watch Tasmania produces this Monthly Bulletin as one of many ways we try to keep our membership and the wider Tasmanian community informed about positive actions our groups are involved in, successes and crime and safety information.

We are always on the lookout for news and information we can share in these publications so please, whenever you do something, big or small, please let us know. Just send an email with the information and preferably some photos and we will do the rest. How easy is that?

However, some of our members have excellent writing skills and are quite capable of writing informative and entertaining pieces that would also be suitable for publication. Another incentive is being offered by Relationships Australia in their Tell Us Your Story competition about connecting communities. These social connections may be one-off moments or regular and lasting interactions that create one-to-one relationships or become the starting point for an ongoing group. Entries close on 27 February 22 and the first prize is $400. More information can be found at: https://neighbourday.org/get-involved/tell-us-your-story-2022/.

The Tasmanian Community Fund offers grants for community projects. The Fund will soon be inviting grant applications from community organisations for projects with a focus on Community Action which includes:

These grants are for $5,000 to $50,000 and they are expected to open in April 22 so if you have a good idea run with it yourself or share your ideas with the Tasmanian NHW community with an email to admin@nhwtas.org.au. 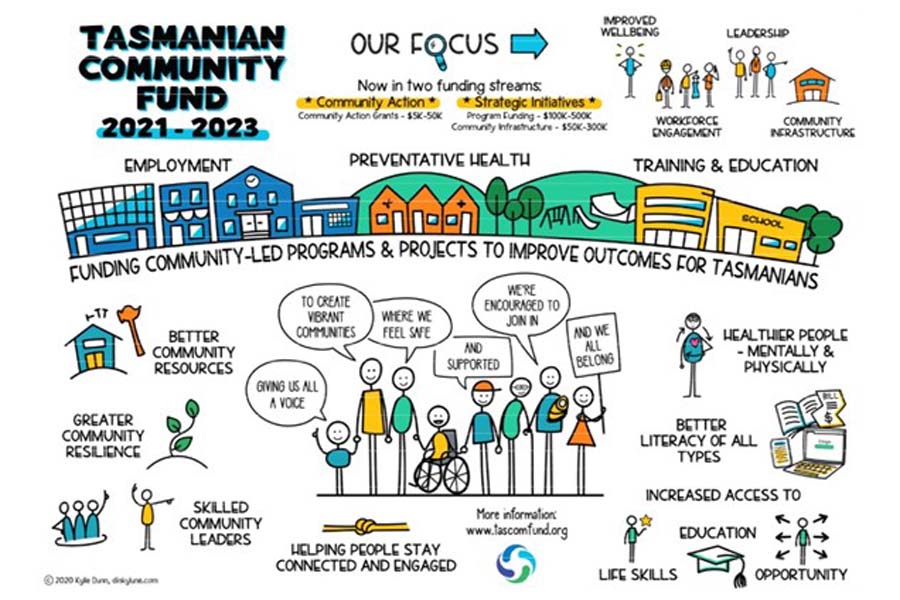 For those Watches in the Clarence Local Government Area, Community Support Grants up to $1500 are now open and close on 15 March 22. Any not-for-profit organisation can apply for support towards ways to improve community development, the local economy, or environmental sustainability.

Tasmania Police is offering a $500,000 reward to anyone with credible information that can help investigators find Darlene Avis Geertsema and uncover the truth about what happened to her the night she disappeared from her Devonport home 43 years ago.

30-year-old Darlene was last seen leaving the family home in Best Street, Devonport around 10pm on Monday 23 October 1978 in her 1977 red Holden Sunbird registered number AS 4119. Her vehicle was located locked and abandoned in a car park on Victoria Parade in the vicinity of the Devonport Oval on the morning of Wednesday 25 October 1978.

Anyone with credible information about this case is urged to come forward. You can provide your information anonymously by calling Crime Stoppers on 1800 333 000 or by reporting it online at crimestopperstas.com.au.

Initiatives for Groups to Consider

Each year we name five initiatives to help your thinking of what you could do for your neighbourhood. Feel free to contact me at any time if you would like further ideas or support to put a project together.

“Volunteering is like a communal glue that holds the community tight, that looks after the frail, the needy, the distraught, and that builds stronger, better communities.” Respected Australian Demographer, Bernard Salt.

“A person who never made a mistake never tried anything new.” – Albert Einstein

Encourage all your members and friends to join NHWT online at https://nhwtas.org.au/join/ as this is how you register as an individual member – and there is no cost.