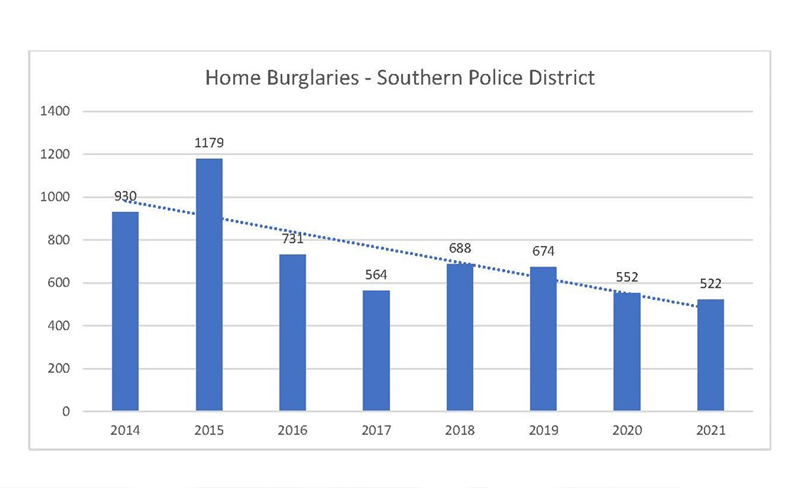 The above chart is a Histogram of “Home Burglaries” as reported in the Tasmania Police – Annual Corporate Performance Reports from 2014 to 2021 for the Southern Police District.

The chart details the number of Burglaries for each year with a “Trend Line” inserted which shows a definite downward trend.

This is the first Report for the Monthly Bulletin of its kind, and we would like to continue presenting Crime Information data each Month. There are a wide range of Crimes and Offences that can be presented in this format for your information.

A brief list of those Crimes and Offences are listed below. Your feedback would be appreciated as to the next topic you would like to see presented.

This information has been collated by Les Chambers a former Tasmania Police Officer with 28 years’ Service.

So how are we going with Stolen Motor Vehicles?

The good news is that in the past twenty-five years, there has been a 62.5 percent decrease in the average yearly rate of vehicles stolen, a drop from 3099 to the current rate of 1160 vehicles. Effectively, 1939 fewer vehicles being stolen each year on average across the five-year average. So, we have been doing a lot of things right.

Further analysis of this data tells us that on average, 100 vehicles each month are being stolen, January has been the highest with 122 vehicles, and the lowest was 70 in November 2021.

It is likely that by the end of the June 2022, the number of vehicles stolen will be just below the five-year average of 1160 – more than three for every day of the year.

Currently the three divisions with the highest number of motor vehicle theft are Launceston (232), Glenorchy (163) and Hobart (112).

However, good results should not give rise to complacency. In the 12 months from July 2020 to June 2021, there were still 1065 vehicles stolen in Tasmania – that is almost three each day. And here’s the rub, 30% of those vehicles weren’t recovered and 187 that were recovered were fire damaged. If that is not incentive enough to be active in keeping your car secure, think about this, in that same year, 1195 vehicles were burgled to steal valuable property.

Often, we don’t know what we have got until it is gone. We all rely on vehicles and the research tells us that always locking our vehicle and keeping valuable property out of sight reduces our risk of being a victim.

Neighbourhood Watch has a Memorandum of Understanding with Tasmania Police which, amongst other things, gives our members access to crime reports on a regular basis. This is a highly valued arrangement because if our readers can see accurate information about what is happening in their neighbourhood, they can take action to maximise their own personal protection.

For some time, we have wanted to include an analysis of the crime data that we access so that you receive informed commentary and some different perspectives on the state of crime and offences that occur in your area and across the state. Tasmania Police do this daily and have trained Intelligence Officers to do that for them.

This month, with the voluntary assistance of former police officers, we are commencing a trial of two such reports and ask for your feedback on the initiative. Any comments can be sent to admin@nhwtas.org.au.

Nominations for Neighbourhood Watch Tasmania Awards close on 30 June 22. The Awards will be presented at a ceremony following the AGM at the Launceston Country Club on Saturday, 19 November 2022.

If you know someone worthy of recognition you just have to nominate them by sending an email to admin@nhwtas.org.au and we will do the rest of the work. We can’t make it any easier than that, so please take the time to nominate members who you think are deserving.

Once again, Bunnings are partnering with NHW to combine their Crime Prevention Week with our Neighbourhood Watch Week from 7 to 13 November 22. We call it The Week. This is a great opportunity for NHW to engage face to face with our communities; promote our brand and activities; and even raise some money to fund other worthwhile activities.

NHW Coordinators are encouraged to approach their local Bunnings Warehouse to explore what activities they could partner in during The Week. Things like the following have been successful in previous years:

City of Launceston Community Grants (Round 1)

This information should be of interest to NHW groups that are within the Launceston boundaries. If you have an idea for a project, Round 1 Opens on 1 July 2022 and closes 31 August 2022 (for projects commencing after 31 October 2022).

A grant up to the value of $5,000 can be applied for if the goal supports community projects/activities held within the Launceston municipality. To be successful the objective of the grant must be to result in community, social, cultural and environmental benefits for the Launceston community.
You can get more details at: Guidelines | Apply (from 1 July 2022)

In May, Tasmania Police launched a new road safety campaign to reduce serious and fatal crashes. One ingredient of this strategy is to scrap cautions for fatal five traffic offences. Perhaps more significantly, the police are calling on the public to help by uploading footage and images of offending driving to their evidence portal.

The public have responded positively and an example of the evidence being provided through the police portal can be viewed in this actual video clip. The driver of this car was charged with overtaking when unsafe to do so, and unlawfully crossing a dividing road marking. If you can’t report what you witness straight away, but have footage, it can be sent to the evidence portal at https://www.police.tas.gov.au/report/.

It is a legal requirement to slow down to 40km/h when approaching a stationary or slow-moving emergency vehicle with lights flashing. This law has now been in place for over two years to improve the protection of those people who are there to protect us.

Vehicle Owners – ‘Lock it or Lose it!’

Power tools have been targeted in recent vehicle burglaries in Burnie. Tradesmen’s vehicles are often a vehicle of choice across the state and the thefts are made easier when the vehicle or toolbox was unlocked.

Protect Your Vehicle, Leave it:

We are always looking for new ideas and initiatives to promote our presence and activities in our area. If we do something we are helping to build awareness about safety and security in our patch.

Old Beach Neighbourhood Watch were looking for ways to increase the awareness of their group in their community. Their Coordinator, Malcolm McArthur reports; “We recognised Polling Day as an opportunity to advertise within the area by handing out Neighbourhood Watch Wheelie Bin Stickers. The day was a success with community members sharing their concerns, and support for the work we are doing in the community. We now have a few more ideas for initiatives within our community“. 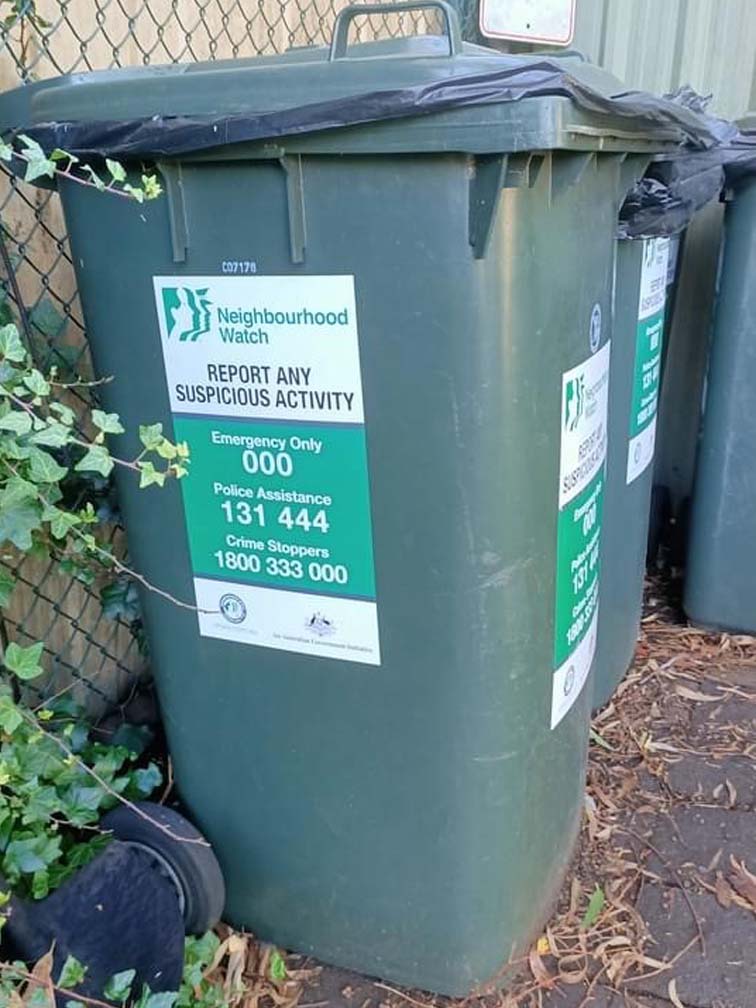 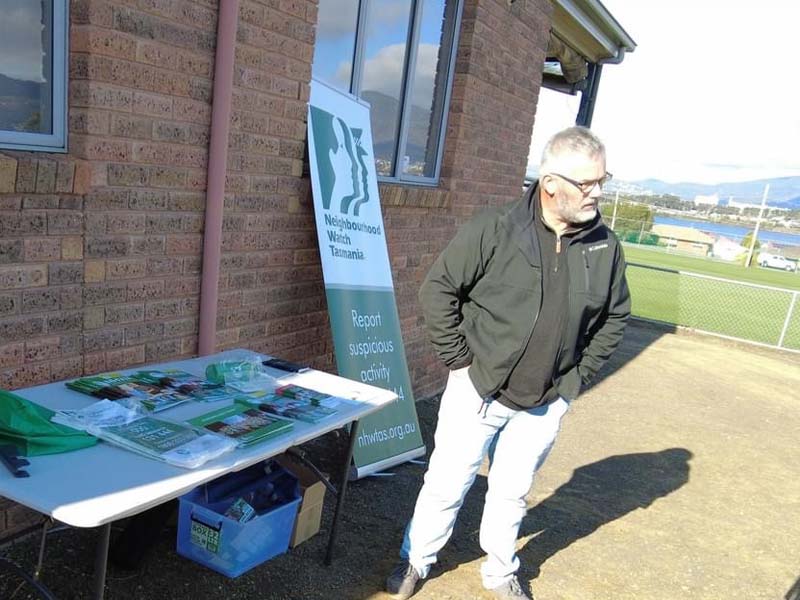 If you have information that might help solve, prevent or stop a crime, you can contact Crime Stoppers by calling 1800 333 000 or go to www.crimestopperstas.com.au. You don’t have to say who you are or get involved.

Crime Stoppers encourages the community to provide information about:

With the help of Andrew Lockman, we are constantly tweaking our website to provide important information; making it more accessible; and giving the reader the opportunity to provide feedback so we can improve. Please take a look at the Meetings page.

If you run your cursor over the details from the Board Meeting of 16 May 22, the third dot point can take you directly to our Strategic Plan and the opportunity to provide feedback. The Board is there to support the members, it is your Strategic Plan, so please check this out and send us a comment.

Each Bulletin we list initiatives to help your thinking of what can be done to support your neighbourhood. Feel free to contact me at any time if you would like further ideas or support to put a project together.